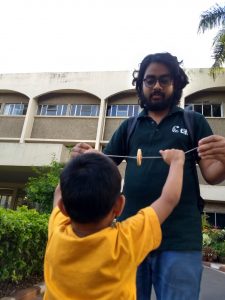 Ishan completed his master’s in pure mathematics from Jadavpur University, Kolkata, and joined as a Ph.D. student in HBCSE in August 2018. The social and political questions around Mathematics as a disciplinary body of knowledge turned him over from pursuing research in functional analysis towards mathematics education. Earlier engagements with tutoring and co-working with students from marginalized communities in Bengal further gave moral and ideological support for making his decision. From the initial fieldwork [1] with a group of masons in Bengal (theoretically premised on Ethnomathematics), he eventually moved towards the endeavor of situating ‘mathematics assessment’ on a novel theoretical basis through excavating his own as well as Bengal’s socio-cultural and political-economic history, relevant literature, his interactions with others during the pandemic-lockdown days. He is working towards the proposal of his thesis. His only publication on the works done in HBCSE is “Role of ‘Error’ in Learning Measurement” which is co-authored by Jeenath Rahaman, another Ph.D. student from the HBCSE math-edu group. It was selected for a long presentation in the 14th version of ICME which was supposed to be held in Shanghai, China, 12th-19th July 2020. He occasionally takes part and co-works in the workshops held at HBCSE with mathematics teachers. He led a few Vigyan Pratibha teaching-learning sessions in HBCSE and beyond.

Ishan loves to remain critical about theories, methods in/for researching mathematics education, and the self. He is one of the founding members of an annually held cultural folk festival ‘Palapabban’ at his place, where they invite folk artists from a diverse spectrum all around India. He has Bengali and English publications in around 10 different magazines including ‘Icarus’ which was co-initiated by him during his Jadavpur University days.